This range of knitwear is made in New Zealand from a yarn that is a combination of Merino Wool and ethically sourced Possum Fur. The Brushtail Possum being an introduced species to New Zealand and has no natural predator there and so is an environmental disaster. The species is protected in Australia where it is from, so it is not under any threat but it is a very real threat to the flora and fauna of New Zealand. As such there is a policy to reduce numbers there significantly. The Merino Sheep was the first sheep breed to be introduced in New Zealand

The Possum Fur when combined with Merino Wool produces an exceptionally soft and warm yarn that is both lighter and warmer than wool on its own. The resultant knitwear is light, warm, very breathable and luxuriantly soft.

The Most Exceptional Natural Fibres In The World

Merino Wool has unique characteristics. Each fibre is exceptionally fine, long and densely crimped, retaining heat close to the skin and keeping out the cold. The fibre also wicks moisture away from the skin, allowing the Merino sheep to stay warm and dry. Spun Merino retains all of these qualities and is one of the most durable natural yarns. Merino Wool is known for its hypoallergenic properties.

The fibres of Possum Fur are hollow, trapping warm air against the skin. The only other animal with this astonishing insulating fur is the Polar Bear, the trapped air not only retains heat efficiently but makes the fur light in weight. Blending Possum Fur with Merino Wool reduces the weight of the garment, while dramatically increasing its warmth. A beneficial enzyme in Possum Fur has been researched and is proven to improve skin conditions such as eczema.

The Brushtail Possum was first introduced into New Zealand from Australia, where it is protected, in 1837 to establish a fur industry. By 1900 the reported damage to native flora and fauna, crops and orchards prompted the government to commission investigations by two of the country’s leading botanists. It was agreed that the potential long-term effects on the environment if left unchecked would be devastating.

By the 1940’s, evidence of damage by possums to New Zealand’s Forest increased. The need for action on a national scale was recognized, and in 1951 a bounty was placed on the animal, but this did little to control the increasing and expanding population of possums. In the early 1960’s possums had spread to 84% of the country.

Today possums are considered the major animal pest in New Zealand with the number of possums estimated to exceed 70 million (twice the number of sheep). Possums are ravenous eaters that consume a staggering amount of native vegetation, which is in excess of 21, 000 tonnes per day.

Elm Of Burford is strongly committed to protecting the biodiversity of New Zealand and countering the adverse effects of human intervention. For further information on the control programs put in place by the New Zealand Government,
please refer to the following websites:

The New Zealand Department Of Conservation

The Blend Twice As Warm As Wool

The idea of blending Merino wool and possum fibres was first developed in 1992 by a New Zealand knitter. Merino Possum knitwear was developed as a by-product of the possum control program, making the Merino possum blend an environmentally sound choice. The resultant fabric is lightweight, twice as warm as wool, highly resistant to pilling or bobbling and opulently soft to the touch. The yarns developed by Noble Wilde has Nylon added in many cases to add strength but the natural fibres are by far in the majority and the result is an extremely high-quality product. 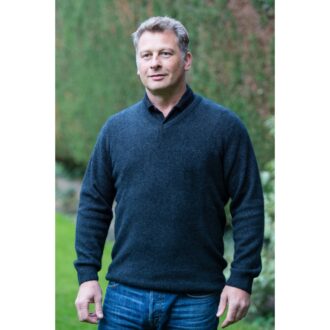 Quick View
Out of stock
Charcoal